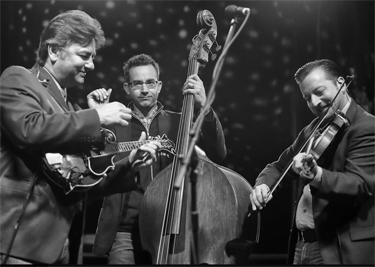 From a source deep, abundant, and pure, the river flows.  Yet, the river changes as it remains a constant, carving away at the edges, making new pathways, gaining strength as it progresses forward.  The Travelin’ McCourys are that river.

The McCoury brothers- Ronnie (mandolin) and Rob (banjo) - were born into the bluegrass tradition.   Years on the road with Dad in the Del McCoury Band honed their knife-edge chops and encouraged the duo to imagine how traditional bluegrass could cut innovative pathways into 21st century music. 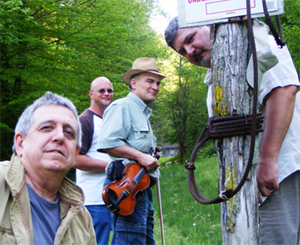 Rodney Dillard has had a long and varied career resulting so far in 2 Grammy Nominations, induction into the International Bluegrass Music Hall of Fame, a well known acting stint on the Andy Griffith Show, many other movie, commercials and TV appearances, recipient of The Outstanding Missourian Award, and worldwide acclaim for his over 50 yrs. of recording both traditional Bluegrass and his own brand of 'DILLARDGRASS'. 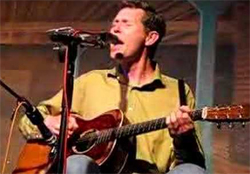 "Capable of telling haunting stories that reach into old weird Americana with a sense of life lived simply yet richly." — Austin Chronicle. His picking and playing find a natural setting in which to inhabit the minds and stories of characters far more likely to be found in the Appalachian foothills than the concrete jungle of his home city, Chicago. His songwriting and guitar picking have their roots in country but stretch their curlicue branches toward bluegrass, rock 'n' roll, jazz, experimental, and more. And his wit, both in lyrics and stage banter, is unmatched by almost any live musician working today. 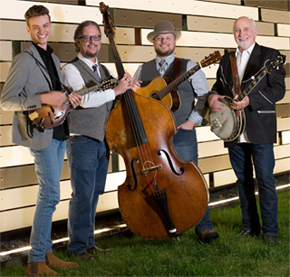 The Special Consensus is a bluegrass band that has achieved a contemporary sound in their four decades of performing, making their music a modern classic. The band is led by Greg Cahill, banjo player and recipient of the prestigious Distinguished Achievement Award from the International Bluegrass Music Association (IBMA), and includes Rick Faris (guitar), Dan Eubanks (bass) and Nate Burie (mandolin). Special Consensus has received five awards from the IBMA and two Grammy nominations. They are four talented vocalists and instrumentalists who follow their creative desires without straying too far from their bluegrass roots. 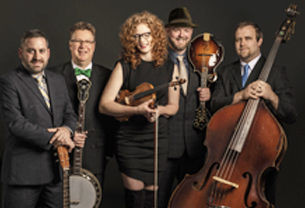 Becky Buller is 2-time Grammy award-winning songwriter and an 8-time International Bluegrass Music Association (IBMA) award winner who made bluegrass music history in 2016 by becoming the first artist ever to win in both instrumental and vocal categories, as well as the first female to win Fiddle Player Of The Year. Her songs, recorded by some of the industry's best, preceded the fiery-haired fiddler's own prominence as an artist in the acoustic music world. Becky co-wrote "Freedom", the lead-off track of The Infamous Stringduster's 2018 Grammy award-winning album, Laws Of Gravity, as well as "The Shaker", featured on The Travelin' McCoury's self-titled release that just brought home the 2019 Best Bluegrass Album Grammy. 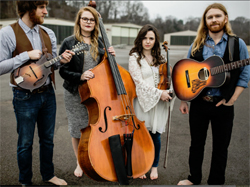 Heartfelt, energetic, and down home. Heralded by CMT Edge as "one of the most promising bands on the bluegrass scene," the music of the Nashville based group The Barefoot Movement is as down to earth as their intention for members of their audience: sit back, relax, take your shoes off, and stay a while. All the worries and frustrations of the world melt away as this charming, acoustic band takes listeners back to a simpler place and time. Whether you're seeking emotional ballads or rip-roaring barn-burners, you can expect a collection of music that offers something for everyone. 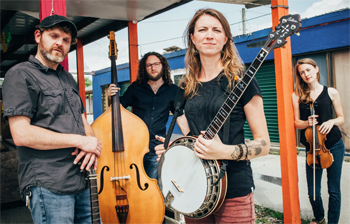 Fronted by banjoist, singer and songwriter Gina Furtado, the Gina Furtado Project lays heavy emphasis on catchy, relatable, original material that spans the gamut from bluegrass to swing to gypsy jazz and beyond. With two IBMA nominations for Banjo Player of the Year to show for it, Gina has been quickly earning recognition as one of the most innovative banjoists on the scene today. The Bluegrass Situation says, 'It is no surprise that her songs would showcase her swift and graceful picking" but that her album also "reveals her to be a graceful singer and insightful songwriter." 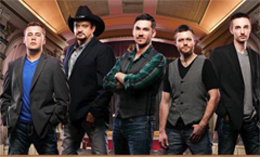 With their fresh sound, original material, strong vocals and innovative musicianship, Breaking Grass is doing exactly what their name implies. Although not quite traditional, the music they present is without a doubt steeped in the timeless genre they grew up listening to. Comprised of Cody Farrar on guitar; Tyler White on fiddle; Jody Elmore on banjo; Zach Wooten on mandolin; and Britt Sheffield on bass; this innovative band formed with one goal in mind - to make music that all ages could enjoy. 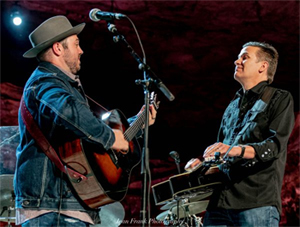 This unique collaborative effort between two uniquely gifted musicians is bound to be a revelation to traditional music fans on several counts. Take a 15-time IBMA Dobro Player of the Year and a Tennessee-born guitar prodigy who made his Grand Ole Opry debut at the age of 11, and you have Rob Ickes and Trey Hensley, a powerhouse acoustic duo that has electrified the acoustic music scene. Known for their white-hot picking, stone country vocals with soul and world class live musicianship, Ickes and Hensley meld together blues, bluegrass, country, that defies restrictions of genre. 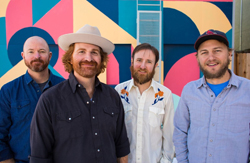 Chain Station is a 4-piece, high-energy, get ‘em out on the dance floor string band born high in the mountains but based in Denver, Colorado. Their music is well-steeped in Americana roots with vocal harmonies that are high, lonesome, and tight. Their picking ranges from lightning-fast to mountain mellow. A bluegrass band that would satisfy a picky old-timer and delight fans of newgrass, a delicate balance indeed. 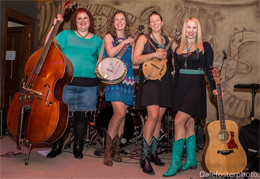 Have you been missing that truly high lonesome sound? The ladies of Fox Crossing Stringband bring all those high harmonies plus driving rhythm of dobro, fiddle, mandolin, banjo, guitar and bass. Six instruments across four vocalists will leave you chasing these foxes for their new bluegrass sound. 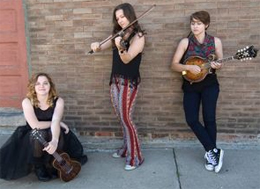 Georgia Rae Family Band has always pushed the envelope of traditional music. Their progressive sound inspired by a mix of Americana, contemporary folk and roots, and a little jazzy swing, all flavored with family harmony and youthful energy. Their original songs are clever and catchy. Fiddle champion Georgia Rae, lead singer/uke Kelly Jo, Quin on mandolin and banjo are joined by a solid driving rhythm "punk rockin' momma" on guitar and Joe Burie on bass. 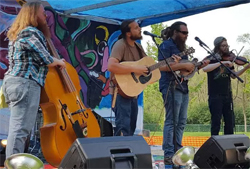 Chicagoland string band playing bluegrass, newgrass, and old-time music. We play bluegrass, drink whiskey and beer, and talk deep ecology. The River Valley Rangers (RVR) are a group of strapping young lads hailing from the Chicagoland region. We enjoy cornbread, long walks in the woods, craft brews, and and of course, bluegrass! 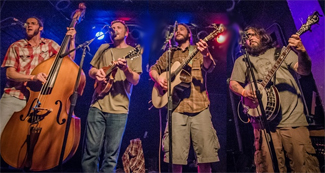 An acoustic Bluegrass / Roots / Americana band based in McHenry, IL. Their musical styles range from bluegrass, reggae, to punk, and beyond, all delivered in a "not-so-traditional" bluegrass voice. Their live shows are high energy, centered around their arsenal of original material and refreshing variety of cover songs interpreted in their own way.

The Grateful String Band puts an bluegrass spin on the music of the Grateful Dead! Anything related is fair game too. Peter Rowan, Tony Rice, David Grisman, Old & In The Way, and of course, Bill Monroe! 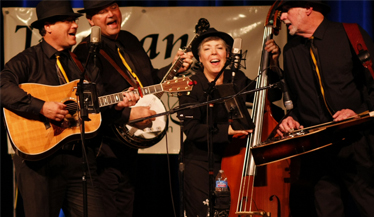 Fast paced, well dressed, and with all the excitement of the early days of Bluegrass. A bit of folk, a hint of Jazz , and a touch of Swing: Chicago Style Bluegrass at its finest! With banjo, guitar Bass, dobro, mando, and occasional fiddle, Truman's Ridge is known for its classic style, energy, and tight harmonies and instrumentation. 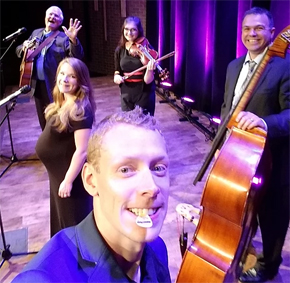 New Legacy is a group of exceptional instrumentalist, and phenomenal vocals, singing meaningful lyrics, all of which that plays part in the lasting trademark of this group!New Legacy brings many years of music ministry experience with them to every performance, along with a wide variety of instruments and music styles. They have a unique range of voices that might sing a traditional bluegrass song one moment, a classic country gospel, or even an acapella.